i’m Not With Stupid Anymore 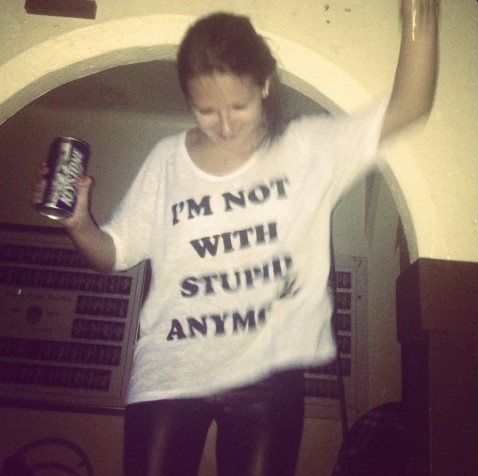 i’m Not With Alcohol Anymore

There’s a pithy saying in AA and, like many of our trite expressions, a few words hold a lot of truth.

The idea is simple. Those who attend regular meetings are more successful in maintaining their sobriety.

When i started in the program, i hit one meeting a week but then i found a sponsor and he suggested a minimum of four a week. One of the things i learned quickly in AA was to read the Big Book, go to meetings and listen to my sponsor. So i did.

Up until recently i was feeling a little more secure and so i let my rhythm dip back to one a week again. Lately, however, things have gotten a little hairier in my world so i decided i needed to up the dosage. Not to say i’d made a mistake in cutting back, i only recognize the symptoms of fear and anger and self pity and i know where to go to cure them.

Also not to say i’m afraid of relapsing. i feel bad enough as it is and i know alcohol will only make everything worse. i don’t need worse. i’ve had worse and i deserve better.

Hence, 6 meetings a week (despite my reaching a year and a half sober on the 11th of this month). There is a peace in those rooms that i’ve not found anywhere else and i’m grateful that in times like these i know where to go to get shelter from the storm and haven from the hell.

Like a battered drinker or a punch drunk boxer, i am here for another round. For those of you who don’t know me, i’m a semi-professional writer on the rocks and a non-practicing alcoholic (if after 30 years of practicing, you still can't do something well, it's best to just give it up). For those of you who do know me, thanks for stopping by anyway and where’s the ten bucks you owe me? Welcome to my Bar None. A hole in the wall where we can hang out and trade the kind of stories you swap only when you’ve had one too many and either can’t find your way home or are afraid to. Hell, it’s cheaper than therapy and plus the pictures are prettier. Here we’ll crack open bottles and jokes and ‘last call’ are the only dirty words you’ll never hear. Pull up a stool and make yourselves at home. http://about.me/AlKHall
View all posts by Al K Hall »